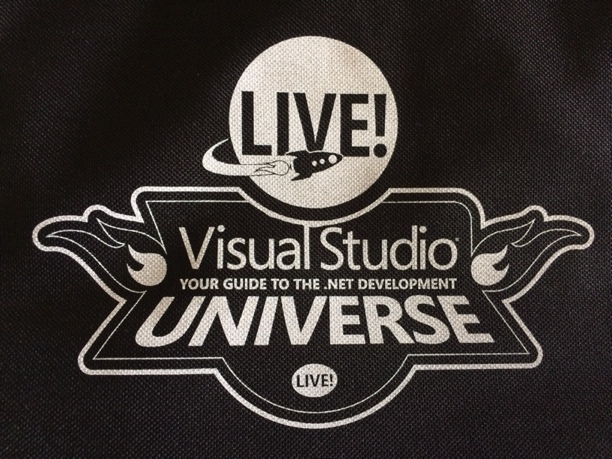 This year I decided to try to attend my first software development conference, and it ended up being Visual Studio Live in Washington DC. The conference just concluded yesterday, and now that I’m back after a full day of travel and haven’t entirely passed out yet, I wanted to put some impressions down for anyone else considering going to one of their future events.

I wasn’t sure what to expect going to a .NET-centric conference. The crowd probably had a higher average age than you’d find at, say, a Ruby on Rails conference, but there was still a wide variety of ages and skill-levels present. It was predominantly male, and at a guess I’d say there the attendees were about 10% female. It was nice to see some female presenters.

The presenters almost always seemed to have a firm grasp on their topic. Many of them have classes on PluralSight, and in some cases their material was a condensed version of a longer PluralSight course. I didn’t mind this even though I have a PS account, since many of those courses are a major time commitment and this gave me an opportunity to get an overview and see if the topic was even worth my time. There were the occasional tech problems that are bound to pop up at a conference, though hopefully the microphone problems can get ironed out for future events.

Some of the sessions I attended and got the most out of:

The monuments tour Wednesday night was also fun, led by a funny and informative guide. We weren’t able to stop in any one spot for long, so I definitely want to go back to DC and do the touristy thing. The conference venue was fine, and the area of DC worked out well with some good restaurants nearby.

Should you go to Visual Studio Live? I’d say the topics skewed towards beginner level to mid-level developer. Many were overviews of the technology, though there were some intermediate “best practices” type presentations. I’d say look at the sessions list, see if there are topics you’ve wanting to dig into or more specific talks on the areas that you work with. If you’re already a senior software engineer and want to explore and evaluate an individual technology or technique, devoting some time to diving into a related book or a PluralSight course may be more useful. I can’t speak to the all-day workshops conducted on the first day since I skipped those.

I am glad that there were dedicated networking sessions, both the lunches and after the talks concluded on the first day. I was able to meet other .NET developers from around the country doing a lot of different types of work.

Some of the impressions I heard from my fellow attendees were that they should try to have fewer but more defined “tracks” where the first day has an intro talk, then the second and third day has more advanced-level presentations. This may be difficult with the varied interests of the attendees, but that might present an opportunity to focus each VS Live event on different topics such as “Web”, “Sharepoint”, “Databases”, and so on.

Overall I was happy with the conference. Nothing totally shook up the way I’ll be writing software, but I was able to learn a lot of new things that I’ll be able to take back to my team and make our product better.