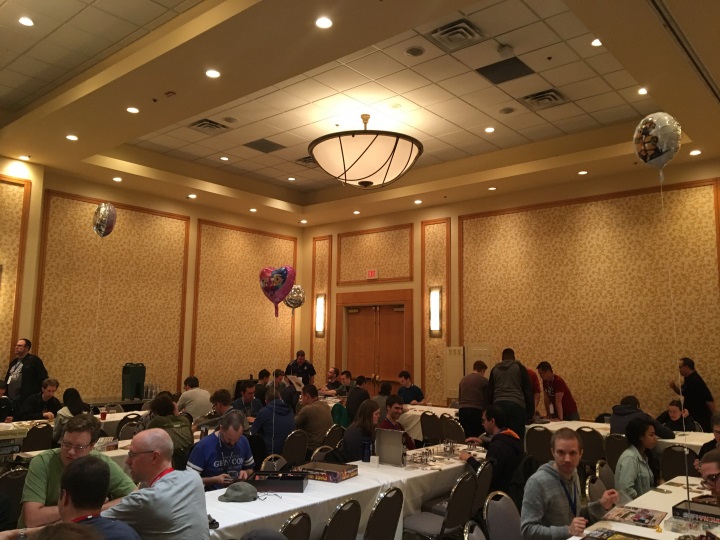 The very first Shut Up & Sit Down Board Game Convention (a.k.a. SHUX) was held last weekend at the downtown Marriott hotel in Vancouver, BC and I was fortunate enough to attend after taking the train up from Portland. Games were played, strangers met, and a wonderful time had.

This was a great board game convention, especially as a first one for me. It was kept on the smaller side and I’m sure they could have tried to go bigger but this was a smarter choice. Rarely did I have to wait very long to do anything. There were some more popular games in the demo room (Stuffed Fables) but there was usually a game open to pop into and give a try. Everybody was really friendly and happy to teach a game or let you join in. One really nice guy let me and a friend borrow his copy of Photosynthesis while he left to grab dinner, and then another random con-goer sat down and taught it to us. I have a hard time imagining that happening at the biggest cons or ending well for the lender.

There weren’t a lot of merch booths at SHUX, just the official SU&SD one and Starlit Citadel selling games. If they put this show on again, I would avoid the sprawl of the typical con where finding unique items is like a treasure hunt. See if you can find hand-crafted and one-of-a-kind gaming sellers that offer something different. I’d also recommend bringing more official shirts since some sizes sold out quickly (shout out to the merch booth gentleman who taught us Deep Sea Adventure as we cast about aimlessly looking for a game to play!)

I anticipated going to a lot more talks and events than I ended up attending. Soon after arriving I realized that this was a rare opportunity to play a lot of new games with people who could teach them to me. The topics often looked interesting but I tried to maximize my time at the table.

The Megagame on Sunday was tremendously fun. It was a new game being put on for the first time, where we were grouped into tribes and each assigned a role such as crafter, hunter, explorer, and so on. We were tasked with feeding our tribe, exploring the map, and figuring out the inscrutable ancestor spirits, another role filled by other players. Hermits had their own agenda and tried to convince tribes to follow the sometimes confusing wishes of their associated spirit.

It went from 10am to about 6pm with a break for lunch but the time flew by. Players were encouraged to come up with creative strategies and take things in unexpected directions through the passing of new laws or consulting with the “Control” staff to see if their cunning plans were kosher, and generally the staff seemed amenable to everything thrown at them.

It was unfortunate to miss out on other events during the Megagame but I’m glad I did it. There was some real team bonding among our group of randomly-thrown-together tribespeople. I’d recommend to anyone that they try a Megagame if the chance arises.

Then were the games themselves. Most of the games I tried were great and I know I’ll be making some online orders and pre-orders soon. Highlights were being able to play Evolution: Climate with the designer and try out some new prototype games with the designer of Two Rooms and a Boom, playing several times as he adjusted the rules on the fly based on how the games were going. The indie game area was essential to check in on as well and I already know that there’s a Kickstarter backing in my future for at least one of the games I tried out there. 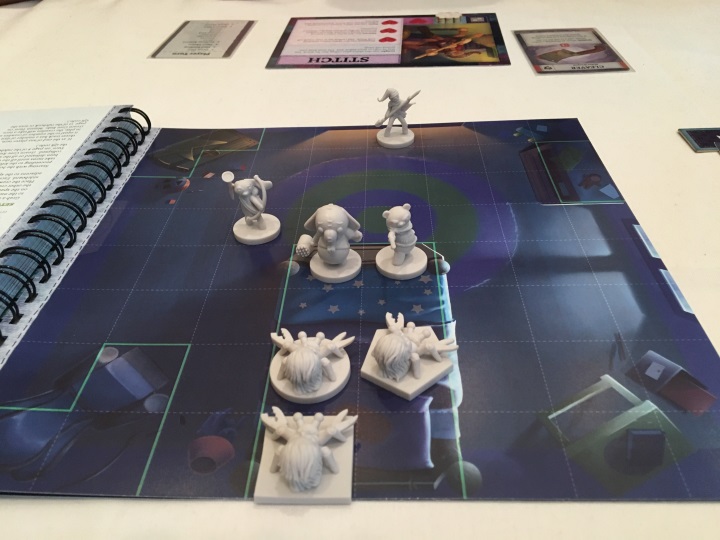 Of those, my favorite were Stuffed Fables (great minis and art, Winnie the Pooh and Toy Story meets Descent/Imperial Assault), Flesh It Out (combine monster body parts and meaty chunks to form a picture that others guess, coming to Kickstarter soon), and Raiders of the North Sea (reprint of a 2015 Eurogame about Vikings gathering resources to go on raids). 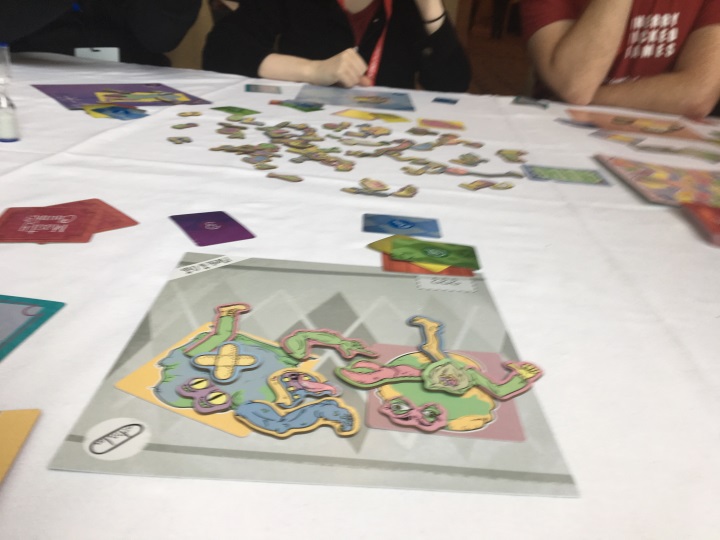 SHUX 2017 was a fantastic experience, a great first board game con, and I wouldn’t hesitate to go again next year. Well done Shut Up and Sit Down and the everyone else that was a part of it! *bass guitar riff*